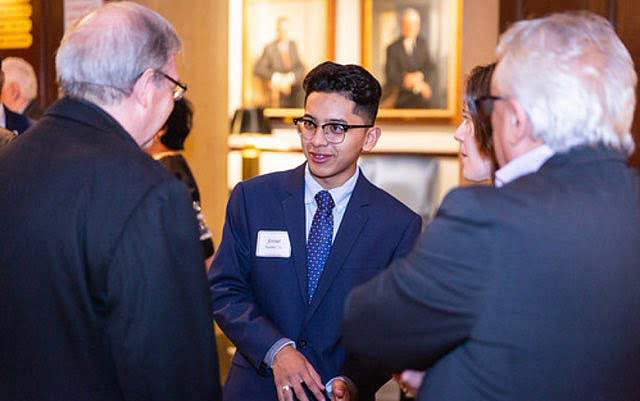 When Josue Ramos Carpio was announced as the winner of Xavier High School’s highest graduation honor, Dan Denihan says “I jumped to my feet.” Dan graduated from Xavier in 1965, serves as the school’s Board Chair, and first met Josue through Partnership Schools. The bond that Dan and Josue share says a great deal about these “sons of Xavier,” as the school’s alumni call themselves. It also speaks to the unique capacity all Catholic schools have to build relationships that can transform both individuals and our society.

The Vincent Taylor, SJ, Gold-X Award is “given to the young man who most upholds Xavier’s ideals…openness to growth, intellectual competence, religious, loving, and committed to justice.” Religion Department Chair Jonathan Dwyer explained that Josue stood out among the accomplished graduates because “he worked tirelessly to foster discussions among the student body…the incarnation of the Xavier value of working for justice.” Those conversations included topics like racism, the wealth gap in the city, and homophobia—which both Josue and Xavier had the courage to engage thoughtfully.

“They taught me that I needed to speak up when there is injustice, and I did.”

The courage and initiative he found got a running start at the Partnership’s Our Lady Queen of Angels, where Josue says he had a “rocky start” after transferring from public school in sixth grade. But he loved the activities, and “teachers also made sure to push me.”

Former principal Mrs. Walsh got him to try the Higher Achievement Program at Xavier. And without Partnership High School Placement Counselor Stephanie Read, he says, he might not have gotten into the school; she identified a mishap with his application and “had faith in me,” working with him to get everything submitted on time.

By trying new things at OLQA, he says, “I was able to be that bold freshman before I was a freshman.”

One of those new things he tried in the spring of eighth grade was going to a corporate office, along with the other Xavier-bound Partnership students, to meet Dan for the first time.

“I thought he was going to be some scary dude,” Josue admits.

According to Dan, though, his young guests “asked questions. They were inspiring. Josue and I hit it off then, and throughout his time at Xavier I would see him at the school,” because Josue made an effort to stay connected.

Josue adds that it “was one of the first times I saw how Xavier connects people.” He saw it often at the school; “regardless of if you’ve ever met that person before, they will be there for you.”

Dan embodies that ethos in part because he too has benefited from the bonds the school’s alumni share. He says that in his own business career, he’s been surprised how often Xavier connections have come into play. “I can always call up someone to ask for something. It comes from the Jesuits, from being men and women for others—you don’t ask who they are; if they need help, we’re here to help.”

Jumping to his feet along with Dan at graduation was Josue’s grandfather, who came from Mexico to see his grandson graduate. “I am the first from either side of my family to graduate from high school,” Josue explains. The rejoicing at his accomplishments came from as far away as his great-grandparents in a small town in Mexico. “They sent videos back of them screaming for joy.”

Xavier is truly a special place. But it is not unique in the power it has to foster bonds that transcend boundaries, ones that bring a first-generation Mexican-American teenager and a 74-year-old Irish-American businessperson to refer to themselves as “sons” of the same place. The capacity of Catholic schools to build and bridge communities is hard to overstate. When school communities like Xavier and men like Dan not only help students like Josue to become part of their school communities but open themselves to be changed by them, then together perhaps we can all become, even more fully, “men and women for others.”

Xavier faculty’s thoughts on Josue and the award can be viewed here: