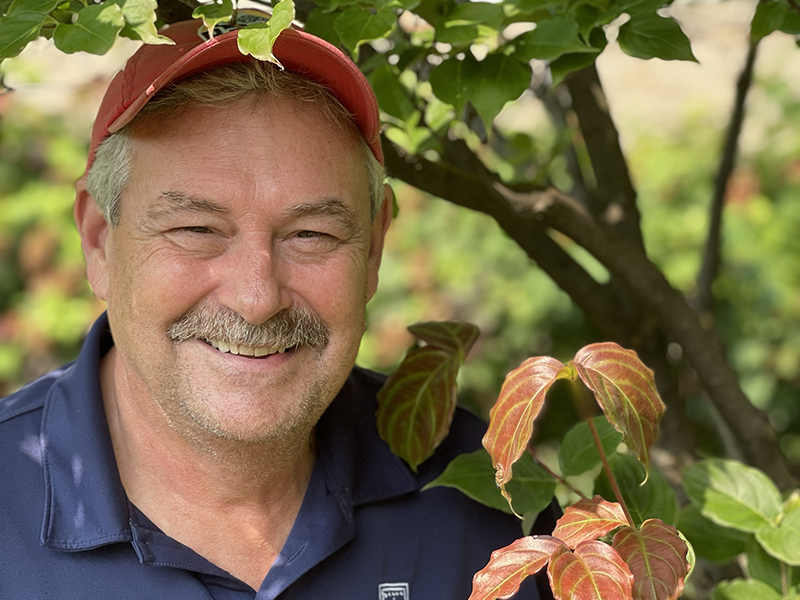 Rich Clark, the founding director of Partnership Schools in Cleveland, passed away this week. This tireless troublemaker, a true man of God who believed in the power and potential of Catholic schools to empower children and change lives, inspired those of us fortunate enough to work with him. And his life touched thousands more.

Our hearts go out to his wife, Moira, his family, and his many, many friends as we absorb the sudden loss of this beloved colleague and trailblazing educator.

Simply put, there would be no Partnership Schools in Cleveland without Rich. He came to the Partnership when he was thinking about starting a Catholic elementary school in the city he loved so much. Instead, he changed his plans and made an incredible leap of faith together with us—leaving the high school he founded, St. Martin de Porres, to make four Partnership Schools a reality in Cleveland.

He rolled up his sleeves, doing everything from raising the funds needed to start the network in Cleveland to substituting as principal one day to cooking hundreds of burgers and hot dogs for volunteers who came to help. And he always pushed those of us around him to do more.

Rich also inspired us. He was “on fire,” as he himself said, with faith in Catholic schools as engines of social justice and community transformation.

A little over two weeks ago, Rich sat down for an interview with Tim Uhl, Superintendent of Schools for the Diocese of Buffalo and host of the Catholic School Matters podcast. You can listen to the whole podcast here. Rich’s own words in that interview convey better than we ever could why we are both heartbroken and determined to carry on the work he started, so we have included some of his reflections here.

It was a response to a call I had in Peru. I believe in God, I am Catholic, I have faith, I go to Mass, but I am not a wear it on my sleeve kind of guy. But I had a mystical experience.

[At Fe y Alegria School 37, part of a network of schools for low-income children], Sr. Annette, a nun who spoke Spanish with a Philadelphia accent, [took us to the chapel].

We walk up toward the altar toward the door on the side to get out, and I’m not praying or anything, just minding my own business, probably waiting for lunch. I’m walking out, and I just stopped—I wrote this down when it happened to me, and I still don’t know what happened to me—I just felt overwhelmed by a lot of things: by love, which was good, by fear, which wasn’t so good…Then I start to cry–not blubber, but tears are coming out of my eyes—this is all within a matter of a minute, and I’m thinking, “What the hell?”…We walked out in the plaza, and John [Foley] asks me what happened? Are you OK?

…I took it as God. But the missing part was, well, what was it about? It wasn’t like “build a school”—it was just this feeling, this overwhelming feeling. I felt thankful, every feeling I ever had—and it has never, thank God, happened again.

We went back to Immaculata, to the high school in the nice side of town…we’re in a room with a whiteboard where we’re going to write this report for BJ Cassin about how we are going to leverage up and get fifty of these schools…and I finally say, “for the love of God, I could start a school in Cleveland by the time we finish this d–n report.” And Larry Reuter, my high school English teacher, said, “why don’t you?”

And that was the message. I take whatever happened in the chapel…as like shelling the beach, getting it ready for the invasion…and then here comes the message, hours later.

Now there is a $35 million dollar building in a neighborhood that hasn’t seen a new school in over a hundred years. It has completely brought life back into the neighborhood—and that’s, by the way, one of the goals. That’s what a school ought to be doing: It should be affecting the neighborhood, improving it, being a resource for it.

“A funny thing happened on the way to starting a school.”

I’d done a lot of reading about founder’s syndrome and tried to avoid that as much as possible.

…When we started St. Martin, we could not offer Algebra to the freshmen. Not a single freshman could take it… that’s changing, slowly…taking Algebra in eighth grade is almost a pre-requisite for a successful educational life.

…I want to move the academic needle. We are really suffering. Cleveland in education in general is suffering. We are one of the lowest performing city districts in the country and have been for twenty years……

A funny thing happened on the way to starting a school…I talked to all these people, and they started pointing me toward a group of schools in New York, Partnership Schools…So I called them up and said I think I am starting a school, can I come and see your schools…I go there, and I witnessed teaching and behavior and learning like I had never seen, ever—and I have been in Catholic schools since I was five. 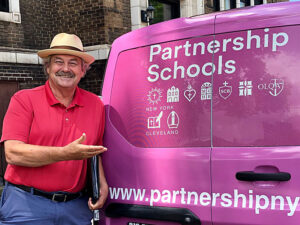 “We have a culture of abundance”

On Partnership Schools’ model and his work:

…The model of the Partnership Schools is not to start new schools. It’s to take schools that are already existing in the cities, who have Catholic school cultures, who are trying the best they can…Walter Breuggemann talks about the culture of scarcity, and that’s what was going on there. And for good reason; the voucher at the time was $4,300 dollars recently and now it’s $5,500 dollars, and to run a school on any of those numbers is tough.

…Why I think I fit in with Partnership is that, no; we have a culture of abundance. God loves us. He wants us to be happy and successful and have a school that’s running great. Don’t worry about it; he’ll help. If God is for us, who can be against us?

…Now we have over 1,000 students [in Cleveland’s Partnership Schools.] The good will of people came together on this one, let me tell you. Phenomenal.

She said, “He didn’t pick you. He’s picking everybody. You just happened to be listening at the time.”

I’m impatient, I’m competitive, I aggressively want things to happen right away. And God has used all of my weaknesses. 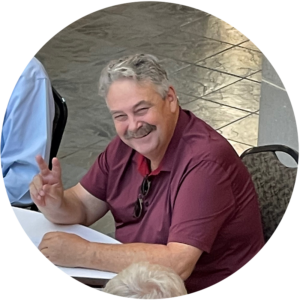 All of this is just a taste of Rich and Tim’s conversation. For more, listen here.

Many people have asked how they can honor Rich and support the work he began. We’ve set up a special fund, and if you’d like to give in honor of Rich, click here.