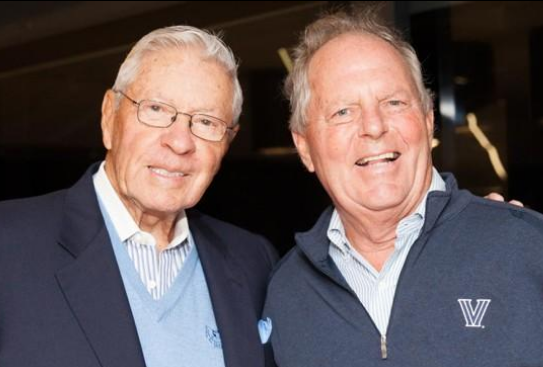 When Bill Finneran was in the hospital in the days before his death, Dick Schmeelk came to visit him. Bill’s daughter Karen explains that when Dick left, “my dad turned to me and said, ‘that man is a gift.’”

We couldn’t agree more. This week, our Partnership Schools community is deeply saddened to learn of Dick’s passing.

Dick supported our students before Partnership Schools’ network even existed, when he got involved with the Inner-City Scholarship Fund in New York. Yet his generosity of spirit extended far beyond the financial support he provided and the advice he gave as we formed a new kind of Catholic school network. He gave us a powerful example of what partnerships can really mean, one that will inspire us for a long time to come.

Even though he described himself once as someone “without the gift of easy conversation with people I don’t know,” Dick formed friendships deep and strong enough to become partnerships in service of good—like his friendship with Bill Finneran. As Partnership Executive Director Jill Kafka explains, “as we were starting the Partnership, it was clear that Dick and Bill had the same instinct of wanting to help, and they were more powerful doing it as a twosome. They introduced us to so many people who have become supporters as well.”

The power of their friendship has continued to work in the service of the students they both cared about even after Bill passed away in 2020. Dick established a scholarship fund in honor of his friend, and it has raised over $2 million in just two years.

Our Partnership students are not the only ones who have benefited from Dick’s impulse to connect people and causes he cared about. For example, much of his success as an investment banker came from projects in Canada, and he established a long-running fellowship program designed to knit together that nation’s French- and English-speaking communities.

As the name of our organization implies, relationships—partnerships—are at the core of what we believe can help children and communities thrive. Partnerships like those among striving families, our schools, and advocates like Dick Schmeelk are crucial if our schools, children, and cities are to thrive.

There is so much that can isolate us these days—social and political differences, technology, the pandemic. Yet even into the last weeks of Dick Schmeelk’s life, he kept alive the connections he had formed and the good that they are still doing. May we all remain as connected and purposeful as Dick exemplified, through the end of our days.