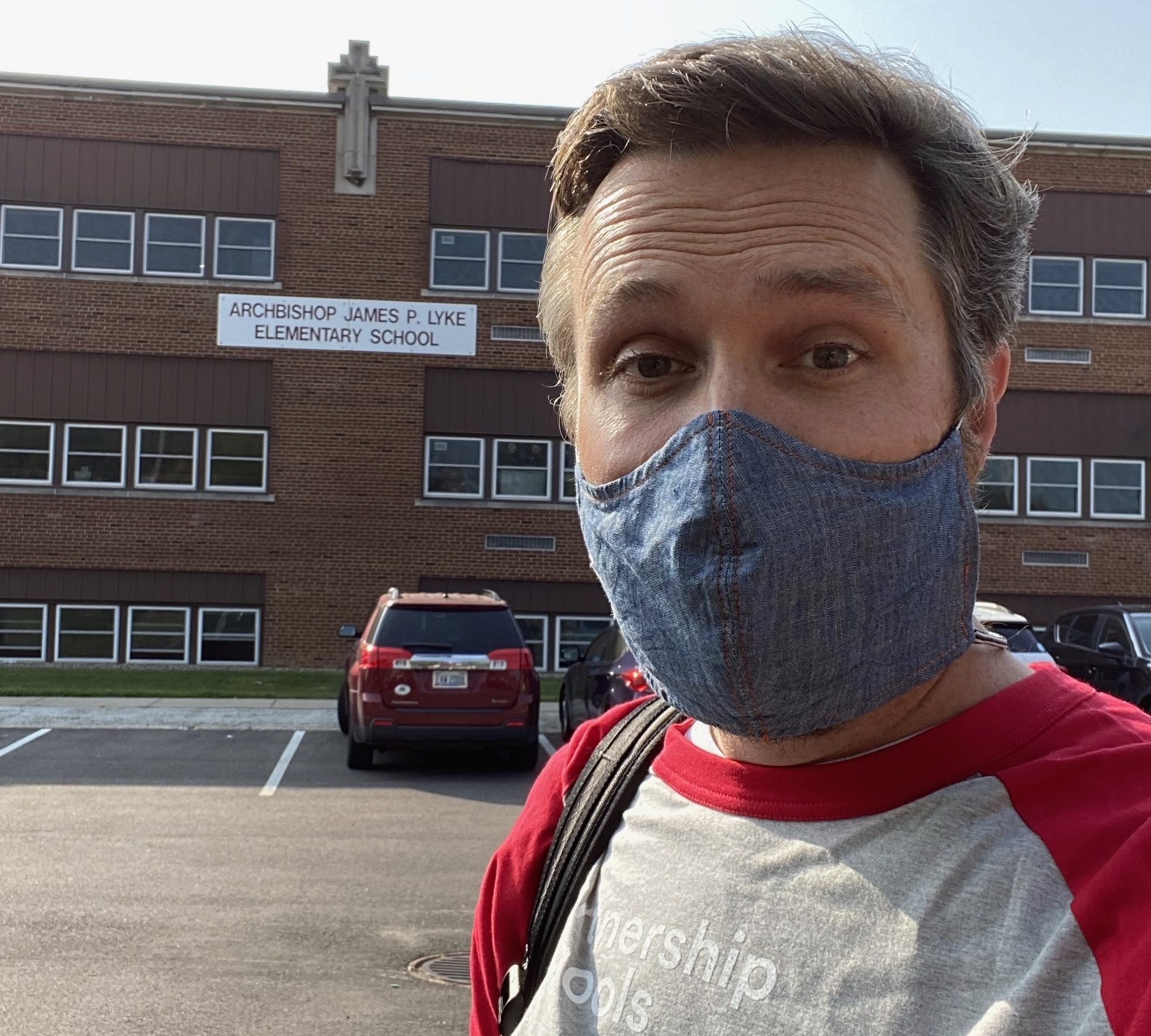 Tim Uhl, Superintendent of Catholic Schools in Montana and host of the Catholic School Matters podcast, interviewed Partnership Schools’ Assistant Superintendent Christian Dallavis for this week’s episode. Their conversation focused on the Partnership’s new schools in Cleveland, and on Christian’s distinctive way of both framing and elevating school culture and root beliefs as the driving forces for Catholic schools’ impact. We’re grateful to both Tim and Christian for the thoughtfulness, zeal, and curiosity they bring to reflecting on the future of Catholic education.

We’ve included a few excerpts of their exchange here.

Tim: [Cleveland Partnership schools] appreciate that they’re now part of a bigger system…they’re now no longer on their own.

Christian: Being part of a network is a big benefit. There are obviously some economies of scale that can be realized, but the professional network that teachers become part of is a significant benefit. Being part of something bigger than yourself is huge as well. And there’s the network support staff that supports all nine schools…the diocese in Cleveland has dozens and dozens of schools to support, and to be able to give lots of focused attention to these two—that’s a real benefit.

Tim: [About the establishment of Partnership School in Cleveland] There were lots of obstacles.

Christian: This was a roller coaster of an experience. When then-Bishop Perez was comfortable turning the schools over to the Partnership, he was notified that he was being moved to Philadelphia—and once a bishop is announced to be moving, he is no longer able to sign contracts of this sort on behalf of the diocese. So he had to write to the Congregation of Bishops to get permission to sign the contract…None of us thought this was going to happen. The Vatican is not always known for its prompt responses. But the Vatican replied, and we got an apostolic indult in Latin that gave him permission to sign this contract, which felt pretty remarkable given the circumstances.

This happened two or three weeks before the pandemic really hit with full force. Part of the deal was that we had to raise a good amount of money to fund the expansion, and that created another challenge. But fortunately there were some incredible supporters that made that happen in Cleveland.

We are seeing school leaders and teachers really leading with two beliefs: we are made for each other and we are better together.

Tim asked Christian next about the enrollment increase in Cleveland—a dramatic increase of well over 30 percent for the two schools that we’ve previously reflected on. Christian added:

One of the primary drivers behind the growth we are seeing now is one of mindset and culture. We are seeing school leaders and teachers really leading with two beliefs: we are made for each other and we are better together.

It’s hard for teachers to take in new kids after the first day or week of school. Some of the teachers are getting two or three new kids a day and four or five kids in a week. But they are embracing these kids with this “we’re better together” mindset that they really buy into—telling every child that we really believe that we are better together and that we are better because you are here.

We believe that we can do hard things: that’s another belief they’ve embraced. The decision was made this summer to offer five-day-a-week in-person instruction as soon as it was safe to do so. We offer parents the opportunity to go to school remotely too. But it’s challenging. We’re not going to pretend like it’s not a logistical challenge to teach both remotely and in person. But we believe we can do hard things, we believe we can figure this out, and we’re going to keep working on it until we can get better and better at it.

I think that mindset that we can do hard things and that we are better together is really appealing to the parents who get to know our schools.

Tim: Had you spent some time in Cleveland, that you knew the lay of the land?

Christian: I am new to Cleveland, but fortunately, we have two people on our team who would win in a landslide. One, who is our enrollment coordinator, is Portia Gadson…she’s part of the reason we’re seeing such tremendous enrollment growth. Portia has incredible zeal and tenacity. She is just assiduous in tracking people who are interested in the school. She is a former air traffic controller, and she knows how to land a plane. Her kids went to St. Thomas Aquinas, and she graduated from Archbishop Lyke.

Between Rich and Portia, we’ve got folks who know Cleveland inside and out. And then Frank O’Linn, who is the superintendent of Cleveland, who I have known for a long time. He used to teach in the Remick Leadership Program at Notre Dame—he’s just been awesome to work with.

The hard part is deciding what you believe and articulating that out loud.

Tim: You talk about school culture a lot. That’s your drum, isn’t it?

Christian: It’s the ocean everything swims in. I think of school culture as the alignment between what people believe and what they do. Sr. Helen Prejean says I watch what I do to see what I believe. You can build a school culture such that you can graduate kids for whom that is true. You do that by building rituals, routines, procedures, organizing your artifacts and physical space—everything about your building—you can deliberately and intentionally shape things in your school to align with what you believe.

Tim: What happens if you don’t do that?

Christian: First you wind up with a handbook that is full of policies that are incidental, that are responsive to emergencies or crises, or the result of people’s preferences. So if you look at most school handbooks, you’ll see uniform or hair policies that are vestiges of some principal’s personal preference at some point in time. Most hair policies are like, “hair should be neat and well groomed.” Well, what does that mean? And according to whom? I think hair should not get in the way of student learning, because that’s what we value and believe, and if it doesn’t get in the way of student learning, we shouldn’t care what hair looks like. Unless there’s anything we believe about it, we shouldn’t make a policy about it.

If you don’t do that, your teachers won’t be in sync; your kids will get mixed messages; you can’t do coherent character or values formation if everybody’s not singing from the same page in the hymnal.

Tim: If we are going to solve these problems of finances and enrollment in Catholic schools, what are we going to do?

Christian: There’s no silver bullet. But there are a couple of things to do. To get more kids in the building, find somebody like Portia, and dedicate resources to unleashing them. Sharing somebody across schools can be effective. Growing enrollment is about building relationships, so finding somebody who can build relationships and knows the community, can get in the community, and can follow up assiduously is important.

St. Thomas Aquinas is on a busy street, and we’ve got parents calling at the end of the day because they see  kids going out to the bus and they’re saying, you’re doing in-person school? I want that. Is it too late to enroll? So aligning what we offer with what parents want—parents also want the kind of community we have to offer.

We have the blessing of having school choice in Ohio. We’ve got voucher scholarships. So this kind of spike in enrollment that we are experiencing wouldn’t be possible [otherwise]. Now, the schools had severe enrollment declines over the past several years even with the vouchers. But school choice policies are an absolute necessity.

Tim: But it’s not going to save every school…school choice doesn’t always mean schools are going to flourish.

Christian: It is necessary but not sufficient. Fundraising and scholarships are needed, at least for schools that serve low-income communities or middle-class communities even.

What I would love to see though is that [enrollment] not be just a matter of recruiting kids just because we need them for the money, which is how I think a lot of teachers worry is happening. But about the actual belief that each of these kids is made for greatness, and that the education we are providing is the education that will unlock that greatness and that will allow them to flourish, and that our job is to fan those gifts into a flame—that this is an amazing opportunity for us to live out our vocation, and we should embrace the opportunity to educate as many kids as possible because this is their parents exercising their ability to choose what they think is the best school for their kid. And that it is an enormous privilege and an honor for us to be able to welcome every new kid in our room who wants to be there.

And it’s not just that we need that kid to cushion our margins, but rather, we need that kid because we have a unique capacity to put that kid on a path to college and heaven. And if we really believe that, that’s a culture shift that can change the way we do business.