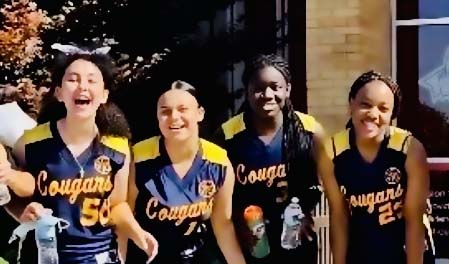 In just a few days, Metro Catholic and St. Francis schools in Cleveland join the Partnership Schools. We thought we’d take a moment to introduce our new additions.

Metro Catholic’s students say the Sign of the Cross together each morning—and they alternate between four of the different languages their families speak: Swahili, Vietnamese, Spanish, and English. It is just one of the many ways the school embraces a rich range of immigrant families. That welcome and diversity are rooted in a school community that includes families with long connections to the school and each other.

Daisy Rivera, a staff member who anchors the main office, is a great example. “My kids went here, and my grandkids. I have been here 34 years.” Indeed, she began working at the school just as it came into existence as the brainchild of Metro’s three “Founding Mothers”—Sr. Grace Corbett, Sr. Regina Davala, and Sr. Virginia Reesing, all Sisters of Notre Dame and principals of parish elementary schools on Cleveland’s Near West Side. Convinced they could accomplish more together, they set about creating a single school from St. Boniface, St. Michael, and St. Stephen schools. In an innovative arrangement, Metro Catholic continues to function in three buildings on two campuses.

“Everyone thought we were going to close after five years,” teacher Amy Murray explains. “And here we are, 34 years later.” Amy and Daisy’s colleague Mary Lou Toler explains the combination that makes the school so special: “Faith and diversity and culture and family.”

All three long-time Metro educators are quick to give credit where it’s due: “I am here because of the nuns,” Daisy explains. “They are always here for you and here for the kids. For example, Sr. Linda doesn’t have to make ESL so much fun, but she goes above and beyond and creates community.”

Amy explains that “Catholic values and Sr. Anne Maline” drew her to Metro. “Being able to teach kids about God is the core of my being…It is an amazing place to work; my second family.” And Daisy uses exactly the same word to explain how the school functions in three buildings: “We work as a family.”

Amy and Mary Lou share that they are most excited about the new curriculum that comes with becoming part of the Partnership. “I want to see our students face challenging curriculum and see that they CAN DO TOUGH THINGS!” Mary Lou explains.

St. Francis principal Carrie Grace has the same strong feelings about her school community. “We are very tight-knit,” she explains. “We work really well together to make sure our students are successful. And no matter how much work there is to do, no matter how stressed I am, I love being here with these people and feeding off their energy.”

Like founding Partnership school Our Lady Queen of Angels in East Harlem, St. Francis’s educational ministry has outlasted the parish, which closed in 2009. And like Metro Catholic, its resilience and character can be traced directly to the Sisters of Notre Dame.

“I love that we still have sisters who are very much rooted in the community,” Carrie explains. “The first-grade aide, Sister PJ, has been here for almost thirty years. Sr. Karen, who was principal for over 25 years, is still here, and so is Sister Renee, who taught in middle school—” all have infused St. Francis with their spirit.

Carrie explains what she considers the appeal of the Sisters of Notre Dame: “They are welcoming and accepting of differences. It makes them really likable.” Carrie went to Catholic schools her whole life and found such a sense of warmth at a St. Francis school Mass that it inspired her to become part of the team there. “It gave me an unforgettable feeling of being connected and loved—a feeling I had not experienced anywhere else. This community is just so welcoming, so special.”

One root belief we talk about often around the Partnership is that we are “better together.” As we get to know our new colleagues from Metro Catholic and St. Francis, we look forward to finding out new ways in which that is true.