Academic Spotlight: A New Teacher, A New Set of Strategies, and Renewed Joy in Math 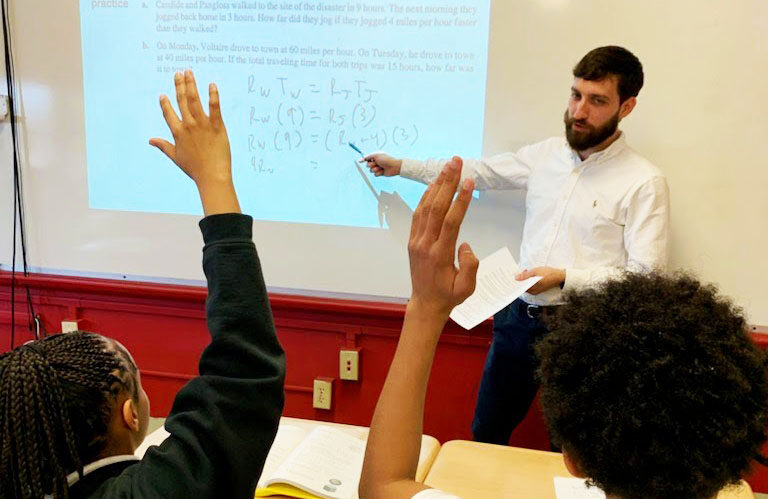 One of our favorite images of what can feel like to be an educator is this:

Sometimes, it can feel like trying something new just adds another plate to an already dizzying challenge. But when teachers make careful choices of new strategies to try, they can actually reduce—rather than add to—the difficulties that both teachers and students are managing.

That aspiration is what Chase McHugh had in mind when he chose “No Opt Out”—and a few other moves—to focus on for a few days. Chase is in his first year teaching middle school math at Archbishop Lyke in Cleveland. Like most first-year teachers, he is getting used to a lot, so he’s definitely spinning a lot of plates—which makes us even more grateful that he took the time to share with us what it’s like to add new strategies into that mix.

No Opt Out, popularized by our friends at Teach Like a Champion, is a strategy for responding when a student does not know the full, correct answer to a question. It is designed to communicate two bedrock truths: it is OK not to know an answer, but it is not OK not to try; and every student’s voice is valued, so their response in the face of a question when they don’t know the answer is important both for their learning and for the rest of the class.

Here’s what Chase shares about the problems he is trying to solve with new strategies like No Opt Out:

During our first few PD sessions, I found myself watching the TLAC videos and thinking, “That could never happen in my classroom.” As teachers, we often fail to do the very things we want to see from our students: to work hard, to try, to have humility. But I stuck with the practices I put in place at the beginning of the year, renewed them after each PD, and added new ones along the way.

Initially, if I called on you, I want you to get the right answer and to understand what we’re doing. But what happens to that student if they can’t get it? What do the other students do while I’m paying attention mainly to one student? What if the question is too easy? Or too hard? I realized the way I was responding has led to a number of “unacceptable” behaviors in class, including students refusing to answer questions and students shouting out answers that may or may not be correct.

This is where No Opt Out comes in:

For the students who shut down when called on, I considered No Opt Out. When cold calling students, instead of staying with a single student until they answer the question, I will give them a few moments to think, and if they can’t get it, I would ask another student that I was pretty sure would get the right answer. But I would always return to the original student—this time with a “Back-Pocket Question” that was key to understanding the lesson, but perhaps less complicated than the original question.

Now I have two students answering questions instead of one or zero. In addition, the original student actually thought about and answered the second question, as opposed to just shutting down after the first question.

As he explained above, though, Chase had more than one problem to solve—and getting No Opt Out working in his room required him not to rely just on that one TLAC strategy, but to use a few others:

For the times when students would shout out answers, we renewed our routines from the beginning of the year, practicing different Ways to Answer. Instead of asking a question and waiting for hands to go up, I started saying “I’ll take some hands for this next one…” and then ask. After a couple of days of re-reinforcing this habit, the number of students calling out basically went to zero.

It is so easy for teachers to get flustered when students don’t answer, don’t answer correctly, or call out—and it is natural to want to respond with correcting the students, not adjusting a teacher’s own practice. But by focusing instead on strategies he can control and adapt, Chase adds tools he can use that make it less likely for him to get frustrated—and more likely that students don’t check out because a question is either too hard or to easy.

As if all that weren’t enough, Chase has tried one more strategy in the last few weeks to help his students learn math well:

I have been sharing my passion for math, saying things like “Math is about getting the EXACT right answer. It’s one of the most beautiful subjects in the world…There’s something incredible about how well it works and how precise it can be.” Communicating this passion to them has been a big help.

Terence was upset. He called out, “That’s what I said!” I calmly asked Terence what 8-17 would be, and he said 9, and I said positive 9 or negative 9? Terence paused and thought about it. Then he said “Negative 9.” And without having to say much more, I think he realized that his first answer was close but not 100% correct.

There aren’t many things in life we can be this certain about. I think the students are growing to appreciate that certainty and the comfort it provides.

There is so much to be said for having a teacher who matches passion for his subject with zeal for teaching it better every day. Just as Chase expects his students to persist to the precise right answers, he’s demanding the same determination of himself to find the strategies to help students get there—and that is the exact right response to professional development that we hope to see.

Nehemie Villarceau is the Director of Talent & Teacher Support for Partnership Schools. Beth Blaufuss is the Vice President for Strategic Initiatives.