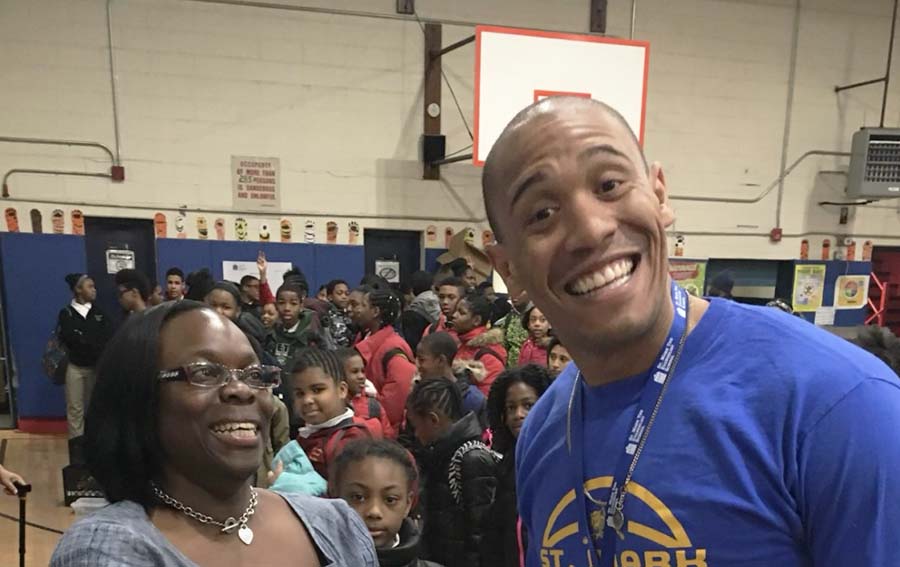 This month, Aaron Dukes is moving to Cleveland. While his new role as Assistant Superintendent for School Support means he will work with all eleven Partnership Schools in both cities, he’s excited to be doing so from Cleveland.

“Progress is happening because of people from the city are leading it themselves, and it’s nice to become a part of a community like that. There’s also something very authentic about Cleveland—an attitude of ‘we want to grow and be better, but our identity is who we are.’”

Aaron says he is finding the same that mix authenticity and ambition at the four Partnership Schools he’ll support in Cleveland. And while he’s new to that city, he is not new to the Partnership; he served as principal of St. Mark the Evangelist in Harlem from 2015-2018, when he left to take on a charter school leadership role in Washington, D.C.

“I am the guy who is walking behind and beside you, cheering, coaching, and thought partnering.”

What does it mean to be Assistant Superintendent for School Support? “I’m the principal coach,” Aaron explains. For school leaders, “I am the guy who is walking behind and beside you, cheering, coaching, and thought partnering.” That’s a role shares a lot with his previous work as an educator. “Regardless of the position, I am a teacher—I am teaching something to somebody, whether that’s students or school leaders.”

Superintendent Kathleen Porter-Magee shares that “We are thrilled to have Aaron back with us in this new role. He doesn’t just understand the way we do things—our curriculum, for example. Aaron sets a high bar for himself and everyone around him when it comes to academic excellence, and he places equal importance on building community.”

She goes on to explain, “That mix of rigor and relationships is the essence of the Partnership’s approach. We’ve never handed principals a binder and said ‘do this’; as we expand, Aaron’s role ensures that we continue to ground our schools’ progress in the meaningful relationships that have helped our principals unlock their schools’ potential since the Partnership began.”

The stakes are high, Aaron is quick to point out—and that’s what motivates him. “It’s essential that our students and our schools succeed.” And he sees his position as a clear signal that the values that drew him to the Partnership when he led St. Mark’s are still front-and-center as the network grows. “I’m noticing that there is a very firm attempt to support all eleven schools the same way that the network did with the original six. And it’s thrilling to see teachers I knew when I was at St. Mark’s now leading schools—people like Chinique Pressley (now principal at St. Mark’s), Trista Rivera (now principal at Mt. Carmel-Holy Rosary) and Jessica Aybar (now executive principal at St. Athanasisus). That growth and continuity prove that what we are doing works, for and with the right people.”

An Alabama native who began his career as an educator teaching at a junior high school in Montgomery, Aaron discovered early on that he has a particular love for middle school students—“they are fun, and they are capable of awe at what they are learning.” Raised Baptist, he found at St. Mark’s a form of schooling that resonates with his faith: “There is something special about schools that want students to grow up to be good people and to form community as well as academic success. To lead with my values, my faith, and to have a community embrace me for that was fantastic.”

As he takes on a new leadership role, he is determined to bring the same sense of himself to all eleven Partnership Schools that he brought to St. Mark’s a few years back. “It was my joy to be embraced by that community because I brought very clear leadership. I wasn’t just seen as the Black man in the room or the Black man in charge of school culture, but the one bringing a bar of excellence that is the same regardless of race.”

“The challenge of leadership is juggling all the tenets that make a good school community,” he explains. And we’re thrilled that he’s bringing both zeal and experience to Cleveland as he supports all our principals in meeting that challenge.