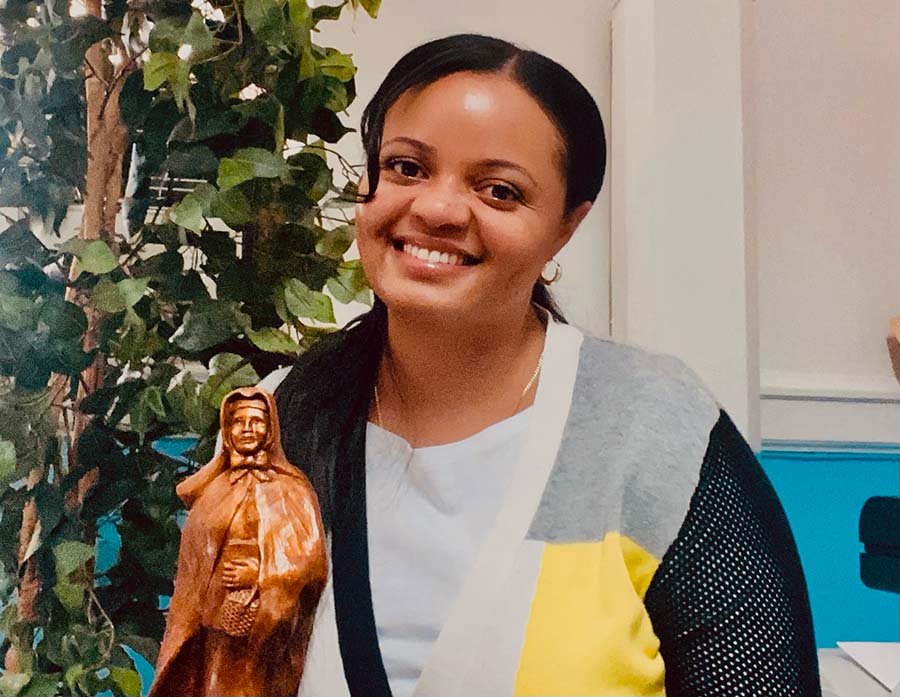 When Alex Benjamin became principal of Immaculate Conception School four years ago, her predecessor—Sr. Patrice Owens, SCC—gave her statue. It depicts Blessed Pauline von Mallinckrodt, the foundress of the Sisters of Christian Charity. Blessed Pauline and three other German women began that religious order in 1849 and built it into an organization with hundreds of members and dozens of missions on multiple continents—all before women in Germany even had a right to own property. So when Sr. Patrice, Sr. Anna Theresa Tran, and  Sr. Francis Tran gave Alex the statue, they were in a sense transmitting to her the strength, holiness, joy and wisdom that has flowed to them from Blessed Pauline, over almost two centuries and through other extraordinary women.

The halls of almost any parochial school can tell a similar story if we take a moment to listen, because Catholic history is women’s history, particularly in the U.S.. Women founded and ran Catholic schools, which fuel the Catholic Church even today. The single largest non-public system of education in this country simply would not exist without generations of resourceful women exercising extraordinary, resourceful power, long before women around the world had much of it.

The nine schools of the Partnership all certainly share in that history of enterprising women. Sometimes, it may be easy to forget that. For example, when we pray for the intercession of holy ones from the past most often in our network, we tend to do it by praying a litany to those after whom our schools are named:

St. Thomas Aquinas, pray for us.

Archbishop James Lyke, pray for us.

St. Mark the Evangelist, pray for us.

St. Charles Borromeo, pray for us.

Our Lady of Mount Carmel, pray for us.

Our Lady Queen of Angels, pray for us.

Sacred Heart of Jesus, have mercy on us.

Our Lady of the Immaculate Conception, pray for us.

St. Athanasius, pray for us.

So we pray often to Jesus, and for the intercession of amazing, holy men along with Our Blessed Mother, Mary. This is undoubtedly a powerful and inspiring group. But perhaps this month, we could pray too:

The Sisters of St. Joseph who led St. Thomas Aquinas School in Cleveland were founded by six women in a French kitchen in the 1600s who did something nuns didn’t usually do then: they ministered outside their convent, one of several orders blazing a new trail for religious life that included both contemplation inside cloisters and action out in the world. The order’s survival through the French Revolution is credited in part to Mother St. John Fontbonne, who stared down the revolution by refusing to sign an oath that violated her conscience; she spent almost a year in prison, missed being guillotined by a day, and went on to bring her order back from extinction. As St. Thomas Aquinas principal Rachael Dengler reflected last year, her school has been through some challenging times, even threatened with closure. But women inspired by Mother St. John passed the school onto her, and Rachael’s moxie is of a piece with theirs.

St. Katharine Drexel, pray for us.

Probably the foundress we talk about the most at the Partnership, St. Katharine founded 145 missions, 62 schools for African Americans and Native Americans, and a university. Among those schools she founded was our very own St. Mark the Evangelist. If she lived today, she’d be worthy of a Forbes cover story for entrepreneurial philanthropy. This heiress—whose choice of the convent rather than marriage was so salacious the Philadelphia papers covered it—continues to encourage us to “open wide our hearts. It is joy which invites us. Press forward and fear nothing.” Our school leaders, including John Bacsik, who currently leads St. Mark’s, take inspiration from St. Katharine often.

St. Elizabeth Seton and the Sisters of Charity of New York, pray for us.

Elizabeth Ann Bayley Seton was a lot of things before she became the founder of the first congregation of religious sisters in the U.S. and the founder of the first free Catholic school in our country: She was an heiress, a stepchild, a wife, a mother, and a bankrupt widow. Her first school failed. Yet the order she founded went on to staff more New York City parochial schools than any other, and they were instrumental in the founding of two Partnership Schools: St. Athanasius and St. Charles Borromeo. Her understanding of the serenity that leading a school requires is as relevant today as it was in the early 1800s: “Do what we can,” she told her fellow sisters, “and God will do the rest.” That mix of resourceful hard work and faith is evident to anyone who has the privilege of working with or observing Natalia Rodrigo, principal of St. Charles, and Jessica Aybar, who leads St. Athanasius.

Venerable Catherine McAuley, pray for us.

The Partnership’s Sacred Heart School was founded by two orders—the Sisters of Mercy, who ran the girls’ school, and the de la Salle Christian Brothers, who ran the boys’ school. Catherine McAuley never set out to form a religious order; in the 1820s in Ireland, she was just a Catholic laywoman eager to help care for and educate homeless women and children. She had built her first institute, brought other women into the work, and assembled a group of social workers to go out in the community before the Church got her to make things official by founding an order. There are over five thousand Mercy sisters around the world today—thanks to a woman who was more interested in the work itself than in titles or structures. That spirit of unpretentious service is absolutely what you’ll see among principal Abi Akano and her team at Sacred Heart.

St. Angela Merici, pray for us.

In 1535, Angela Merici recruited twelve women to join her in devoting themselves to two things: God, and the education of girls. In the process, they became officially what no women in the Catholic Church had ever been: a community of religious women formed to educate girls. Almost 400 years after St. Angela died in Italy, women following in her footsteps carried her mission to the U.S. as the Ursuline Sisters, and when they made their way to Cleveland, they founded two of the schools that are now part of Archbishop Lyke: St. Timothy and St. Catherine. The Ursulines are an order that branched off from the Angelines—so just as Archbishop Lyke School’s history is one of mergers, the history of the order that helped found some of its predecessor schools is likewise one of change. That ability to evolve, to become something new within the Church and to lead others through such change, is something Archbishop Lyke’s principal Nancy Lynch knows well, having led her school through its transition into the Partnership and a new way of running Catholic schools.

These are just a few of the holy women to whom we owe the schools of the Partnership and the traditions of Catholic education. The Pallotine sisters at Holy Rosary, the Sisters of St. Agnes who founded OLQA, and most of the women who rolled up the sleeves of their habits and ran America’s Catholic schools have names that do not get remembered in litanies. Like Molly Smith and Liz Nuzzolese, though, who lead these schools now, their impact resonates. And like Molly and Liz, some of those impactful women were not consecrated religious—like Winifred Doris, a St. Charles Borromeo teacher whose former students are honoring her passing by raising funds for scholarships in her name, and Jean Lertique, a teacher at Mt Carmel School who so inspired a truant boy in the 1960s that Anthony Belli remembers her encouragement now, decades later.

No doubt, some of our schools will honor Women’s History Month in March—perhaps with bulletin boards featuring women who have been astronauts, judges, Vice Presidents, and more. In addition to their inspiration, it might be wonderful to take a moment to look down the hallways, to think of the spirits of the women who walked them in decades past and convey them to us now, and to ask them all: pray for us.