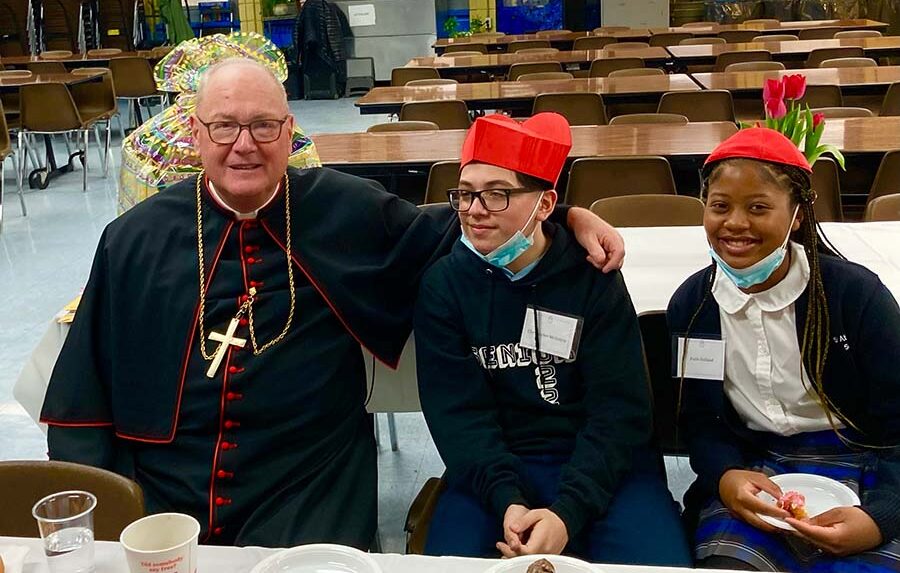 Today, the Partnership and St. Athanasius School in the Bronx hosted Cardinal Timothy Dolan. He was kind enough to celebrate Mass for us, along with pastor Fr. Jose Rivas, and he visited the school as well.

In addition to his spiritual leadership of the Archdiocese of New York, where seven of our schools are located, Cardinal Dolan was instrumental in launching Partnership Schools when our network began nine years ago, and his steadfast support has made a real difference for our schools, our community, and our network.

Two St. Athanasisus students—Christopher McIntyre and Faith Holland—were Cardinal Dolan’s student hosts this morning. And just as there could be no one better than our students to show the Cardinal our school, their take on his visit says more eloquently than any of the rest of us could what the visit meant.

We were really nervous.

We were picked to be Cardinal Dolan’s student ambassadors because we have lead tours before for visitors, such as future St. Athanasius students. Even though we’ve shown people around before, we knew the Cardinal would be different, and we were nervous.

But he was so friendly.

In particular, we noticed that he showed the values of our school during his visit. The values of all Partnership Schools are integrity, humility, hard work, and service, and St. Athanasius adds values like kindness, acceptance, and inclusion.

Cardinal Dolan showed us service and hard work when he stopped in to visit every class. He has busy days, and we weren’t sure which classes he would visit—but he took the time to visit everyone, which shows us what inclusion means in action.

He also showed inclusion when he took pictures with everyone who wanted one, and when he invited everyone at the end of the tour to come in to the cafeteria to eat with him.

Really, coming to visit showed us that he cares about schools. We have an amazing staff and teachers at St. Athanasius, and for him to come see their work and visit us was great.

I [Christopher] was an altar server during Mass too, and he was so kind to all of us serving, even when no one else was watching.

We hope he got to see how much of a community we are—and that we are inclusive too. If you don’t know Hunts Point or the South Bronx, it might not seem like a close community, but we really are a big family, and we hope he saw that at St. Athanasius today.

You have to lead with values, and it was great to see Cardinal Dolan lead with some of our school community’s values today.

Plus, he gave us a dress-down day on Friday.

Christopher McIntyre and Faith Holland are eighth graders at St. Athanasisus School in Hunts Point, the Bronx. They will be attending Monsignor Scanlan High School in the fall of 2022.